There is persistent shortage of houses in the Netherlands, which everyone can agree upon. There’s a reason why it’s a hot debate topic every time elections come around. Houses are being built but not quickly enough; as a result, the housing market is ‘frozen’. In addition, it’s not just about adding more homes but more suitable homes, particularly mid-market rentals. Capital is plentiful and institutional investors are eager to back new constructions. The only thing holding them back is the accumulation of regulations, high land prices and negative public opinion. There is a political solution that’s up for grabs: don’t consider investors as part of the problem but work together with them to find a solution.

Not only are there too few houses ...

ABF Research’s latest forecast figures show a shortfall of 330,000 homes in the Netherlands. The government has established a goal of building around 75,000 new homes every year to close this gap. The current rate of production is nowhere near achieving this number; the nitrogen crisis and the new PFAS standards have certainly not helped. Yet we would still not be out of the danger zone, even if we were actually on schedule. The problem appears to be deeply rooted in the Dutch housing market.

There is a structural mismatch between supply and demand. The price levels in the big cities do not match the income classes of the inhabitants. This leads to skewed housing: the most recent Local Housing Monitor shows that between 13-18% of social rental homes in the four largest cities are occupied by residents whose rent is officially too low for their income level. That tallies up to more than 83,000 homes. Many rental houses in the social sector would become available if those people moved on. There are more than enough social houses, but a considerable portion of them are occupied by people who have more to spend but nowhere to go. This congestion is a huge problem – particularly within the Randstad, which is the most consistently popular area, but now increasingly within the provinces too.

Increasing the volume of social rental houses does not lead to a solution; effective policy to release the existing stock does. This type of policy has not yet been enacted. For example, the Amsterdam municipality uses a 40:40:20 ratio in its new-build plans for social rent, mid-market rent and the top segments, respectively. Such a policy is ineffective; this ratio no longer reflects the income distribution of households and has not for a long time. As a result, this policy exacerbates the existing problems within the housing market.

Lack of capital is not the problem

Medium-priced houses have to be built over and above this, and funds are needed to realise that. Fortunately, the housing market is still an interesting investment possibility for local and international institutional investors. In 2020, investment volumes reached a record high of €7.8 billion, about half of which was made by foreign investors. According to CBRE research and the graph pictured below, many investors also want to target the housing market in 2021.

Investors see Dutch homes as safe investments with stable but modest returns over the long term. They are also eager to invest in new construction projects, because these often align with their own goals in terms of sustainability and quality. By doing so, they repeatedly show their willingness to accept conditions, restrictions and modest returns on residential investments. However, this possibility is not made easier for them. Municipalities are throwing up more obstacles in addition to the strict new-build requirements, such as unrealistically high land prices, increasing sustainability conditions (though admittedly justified), more far-reaching rent regulations, as well as tax increases. 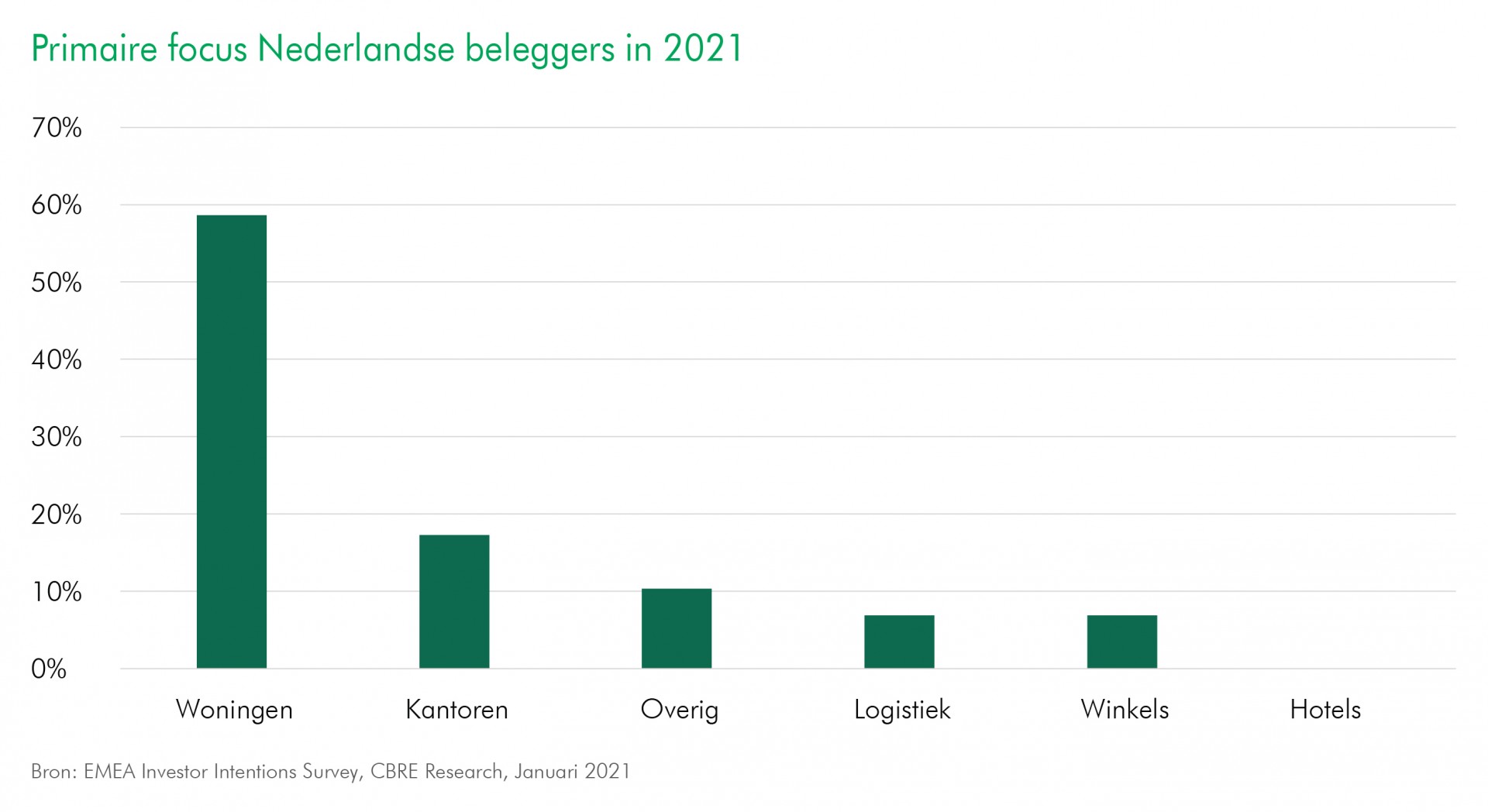 The available investor capital can certainly help to solve the current and predicted housing shortage. However, due to high costs and over-regulation on both purchase and yield, it is getting harder and harder to actually use the available capital in investments. Adequate policy can help with this, and can bring the interests of tenants, project developers and investors closer together, by for instance:

If not, an increasing number of project developers and investors will have to refocus on more profitable options. If that happens, the solution to our housing shortage may be further away than ever.

Should we want investors?

Many municipalities refuse to accommodate investors, saying that they ought to be willing to sacrifice some returns in order to be socially responsible. That position doesn’t recognise the true reality of the situation. In policy pieces and debates, the activities of institutional investors are often lumped together with the isolated cases of excess that occur within the private rental market, which only accounts for a very small part of the overall rental market. This is a misconception that unfairly maligns the institutional investor and their position and is often used to justify more regulations in the housing market.

In actual fact, most institutional investors who opt to invest in the housing market are pension funds and large insurers – bona fide parties who are seeking long-term security on behalf of large groups of citizens, and thus prefer a stable return over a possibly risky maximal return. That’s not just to fill their coffers, but also to have enough cash to meet their pension obligations, and so on.

Please email either or both of us at thomas.westerhof@cbre.com and melissa.verhoef@cbre.com to discuss more about the housing shortages and the outcomes that capital can bring.

Rent controls only increase problems in the rental market

A recent study by CBRE shows that Minister Hugo de Jonge’s plans to regulate rents in the Dutch rental housing sector will not lead to more affordable rental housing. In actual practice, rent controls will lead to a decrease in the number of …
Lees meer

Project developer Yisheng has reached an agreement with Round Hill Capital on the sale of 703 independent student housing units at Leiden Bio Science Park (LBSP). The two parties concluded an agreement on the sale on 2 April. The accommodations, …
Lees meer
Back to newsroom