Most sustainable shopping centre of the Netherlands wins another award 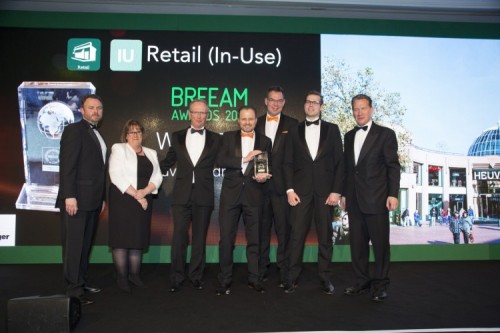 Shopping centre Heuvel Eindhoven has won the BREEAM Award 2017 in the category Retail In-Use. This was announced at the official awards ceremony in London. BREEAM is well-known for its method for sustainability assessment of commercial buildings. The organization hands out awards every year for sustainable projects across Europe. This year, five projects from different European countries were nominated in the Retail In-Use category.

Shopping centre owner CBRE Global Investors and shopping centre manager CBRE wanted not only to turn Heuvel Eindhoven into the best shopping centre in the area, but also the most sustainable. A major part of the redevelopment process was the renewal of the BREEAM-NL In-Use certificate. This international standard for sustainability was leading in the project and the basis for all plans. The project was completed in the second half of 2016.

Thanks to the renovation, renting levels were up, the interest of the public increased and operational costs went down. All in all, a sustainable investment that was awarded once more. Earlier, Heuvel won the NRW Marketing award 2016. It was also nominated for an ISCS Solal award 2016 and the 2017 European Shopping Centre Award.