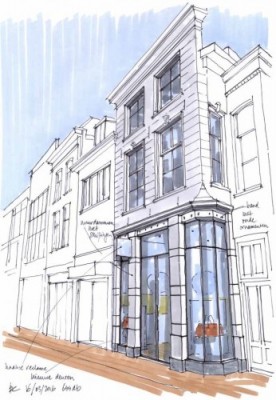 From the 1st of November Smaak Amsterdam leases approximately 65 sq m of retail space in Den Bosch (Kerkstraat 14). The label has signed a long-term lease agreement with a private investor. After shops in Amsterdam (2 x), The Hague and Rotterdam this is the fifth location of the brand.

Smaak Amsterdam is a typically Amsterdam brand that is run by a small, close-knit team with a true passion for bags. Having found its way to the hearts and closets of many fashionistas in the Netherlands, Smaak is now rapidly expanding into Europe.

Smaak was established in 2010 by André Grundmann, who was the owner of a well-known fashion store in Amsterdam. His decision to start designing and producing his own bags proved an instant success, as Dutch celebrities and it girls soon started wearing his beautiful, colourful designs. Today, Smaak bags are sold by numerous retailers in the Netherlands, from high-end department store De Bijenkorf to fashionable boutiques.

Real estate advisor CBRE acted on behalf of Smaak Amsterdam during this transaction.