Now that the Dutch economy is opening up again, CBRE is seeing strong evidence of renewed interest in real estate investment. Although the first half of the year was quiet, the international real estate advisor expects market activity to pick up considerably over the next two months, raising the total investment volume for 2021 to €17 billion.

“We base this expectation both on the rate at which transaction pipeline is filling up and on real estate developments in neighbouring countries, where market recovery is clearly visible,” says Erik Langens, Executive Director of Capital Markets at CBRE. Investments across Europe were up 45% in Q2 compared to the same period in 2020. This is mainly due to increased activity in Germany and the United Kingdom.

The office market is picking up momentum, as evidenced by the number of companies seeking office space in Amsterdam. “Most of the uncertainty that dogged the office rental market has gone, and investors in this sector are on the move again. Companies are looking to the future and considering new hybrid approaches to working practices and returning to the office. Meanwhile the vacancy rate in Amsterdam is levelling off, while the large office investments being brought to market will generate more transactions in the coming months,” Langens explains.

Investments in the housing market will continue to rise slowly in the coming period, following a temporary dip due to the rise in transfer tax. “The current volume is being driven primarily by new build transactions, while large portfolio deals are lagging behind the levels we have seen in recent years. Despite this, the residential sector remains the largest sector this year,” says Thomas Westerhof, Head of Residential at CBRE.

A new dynamic has emerged in retail real estate, and will set the tone for the coming period. “We are seeing an unprecedented demand for convenience driven retail. Retail real estate remains a liquid market, with a very active group of buyers who have the expertise to generate returns in these challenging conditions,” says Lodewijk Buijs, Senior Retail Director.

The logistics sector continues to perform extremely well. Investments totalling €1.8 billion were made in the past six months, up 17% on the first half of 2020. Meanwhile investors are increasingly seeking out niche markets. “Operational real estate, including data centres and laboratories, will represent a substantial part of this year’s total,” Langens predicts.

Clear signs of market recovery are also visible internationally. Office investments are growing again in Belgium, Germany, Italy, Ireland, Spain and Scandinavia. The logistics sector is putting in a strong performance across Europe, with investment volume in Q2 2021 up 93% on the same period last year. The European hotel market is also seeing a resurgence of investment, delivering a 127% increase in the second quarter.

Catch-up effect in the second half of 2021

“All things considered, the coming months will be defined by the market catching up. The investment volume in the first half of the year was €4.5 billion and CBRE expects that two strong final quarters will push this figure up to €17 billion for the whole of 2021,” Erik Langens concludes. 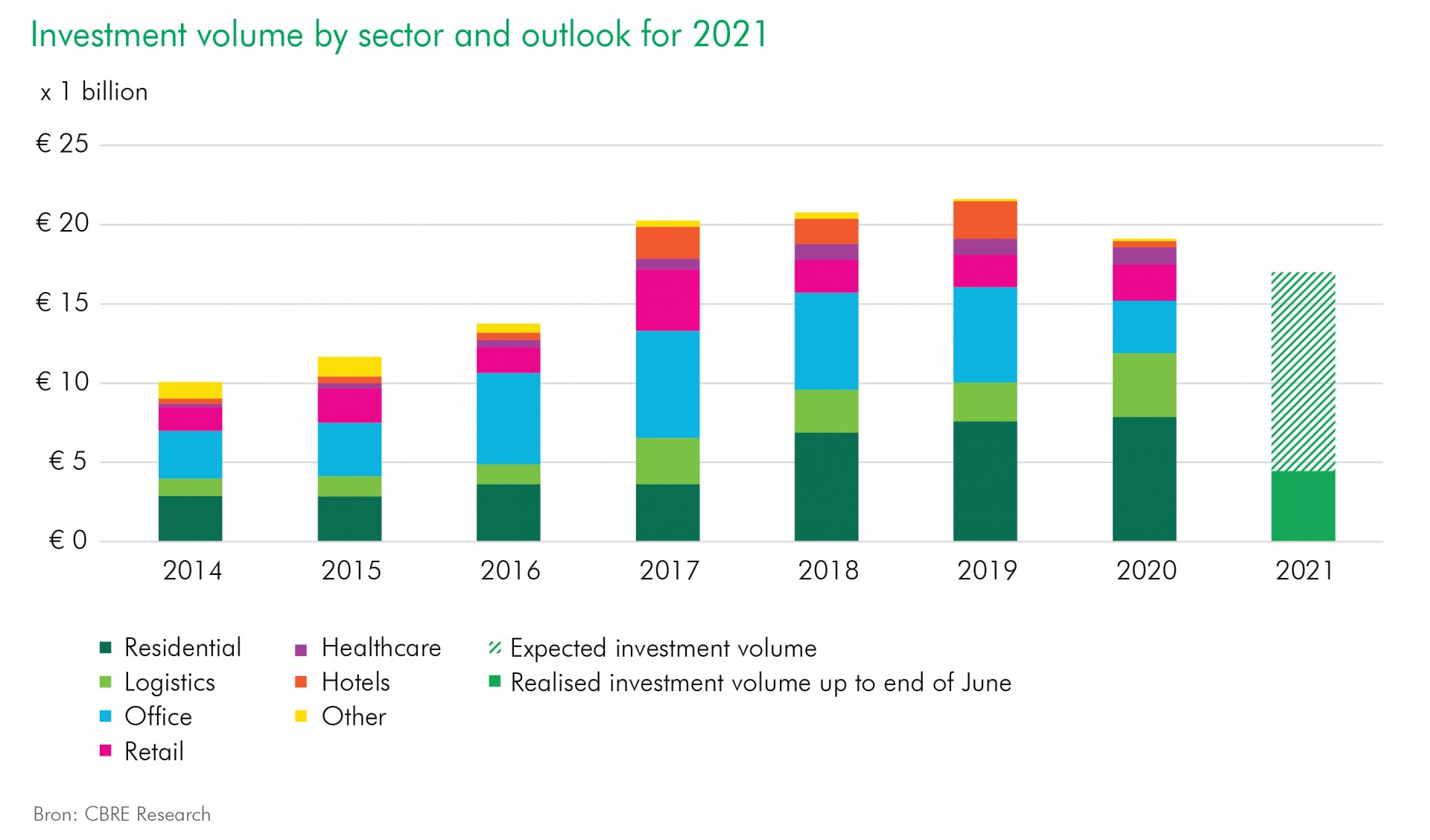 CBRE Figuren pers_Investment volume by sector and outlook for 2021

Driven by strong activity in the UK and Germany, total real estate investment in Europe reached €70bn in Q2 2021, representing an increase of 45% on the same period last year, according to the latest data from global real estate advisor, CBRE.The …
Lees meer
Terug naar de Newsroom