The Dutch retail market is at a tipping point and is set to see major changes in the years ahead. In a report published today, real estate advisor CBRE charts all the important trends and key factors. CBRE has analysed the expected growth and fall in demand for retail space – by city, region and sector – for the next five years.

Changing demographics and consumer behaviour set to have major impact

Alongside e-commerce, demographic changes – population growth and decline, changes in the make-up of households and the ageing population – are all influencing the retail landscape. Changes in consumer spending – Dutch people are increasingly spending more on services rather than on goods – are also playing an important role.

E-commerce spending in the Netherlands will continue to increase in the years ahead, but CBRE also expects its growth to slow: the current model of online shopping, with free shipping and returns, is financially unsustainable. The processing and delivery costs outstrip revenue, as a result of which most e-commerce operations currently run at a loss. These costs, currently often paid by shareholders in their quest for market share, will increasingly be passed on to the consumer. This will ultimately inhibit further growth.

According to CBRE, the growth in tourism is one of the key drivers behind spending in the Dutch retail market. The number of tourists in the Netherlands will increase further in the years ahead and tourists will account for a significant proportion of consumer spending.

Anticipated need for retail space by 2023

A quarter of all retail space will be surplus to requirements by 2023 and will need to be transformed and repurposed. This is according to a model developed by CBRE based on the key factors in the market in order to make predictions about the growth and fall in demand for retail space over the next five years, by city, region and sector.

Major differences between regions and sectors

There are significant differences in the expected demand for retail space in each region and sector. Thanks to tourism and demographics, some cities still have room for additional retail space in certain sectors. Of all sectors, fashion stores face the most difficulties, according to CBRE. In the Netherlands, they predict zero growth in retail space for fashion as the most realistic prospect for the sector. Leisure stores (electronics outlets, shops for sport and hobby items and toy stores) are also in difficulty. However, there are some cities where leisure stores still have potential for growth. 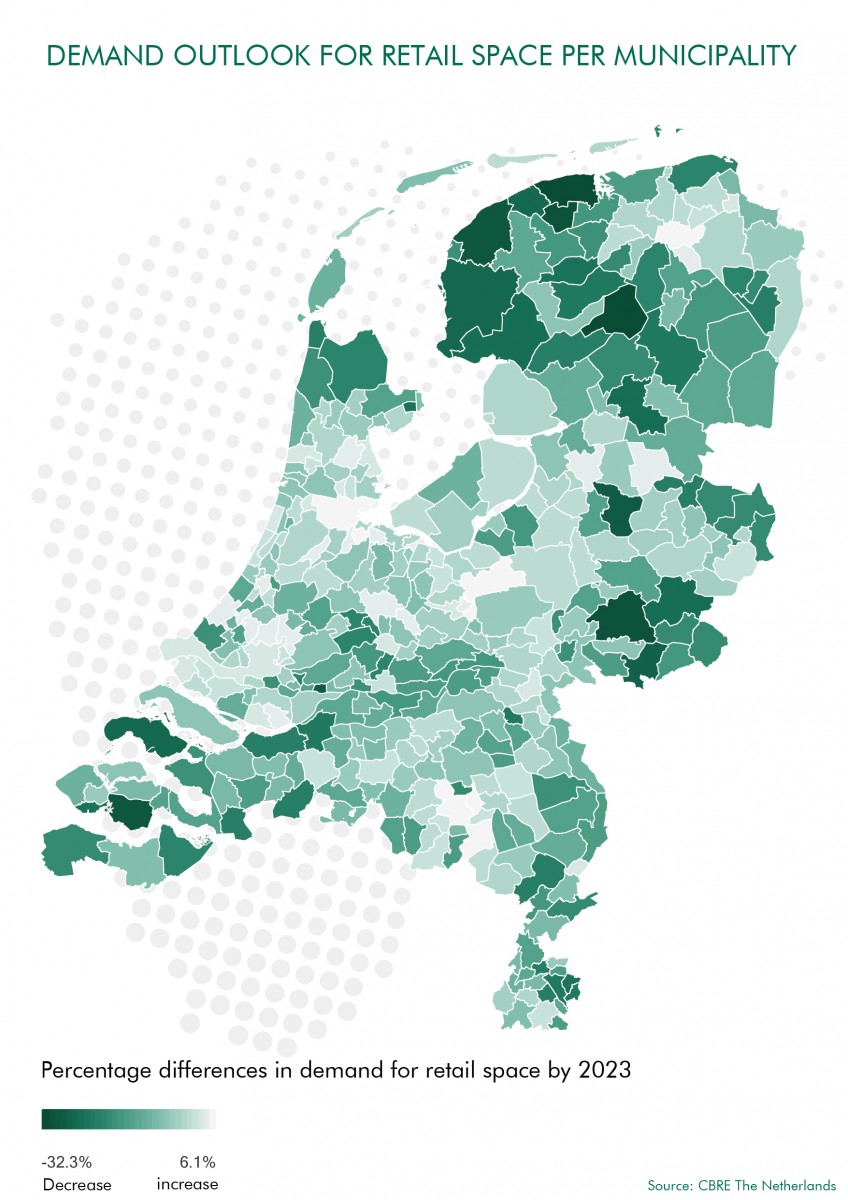 CBRE_Demand for retail space by municipality
“

“The retail market is highly complex because there are so many factors at play. Our aim was to unravel, combine and quantify these factors in order to predict future demand for retail space in the Netherlands. This is the first time that these factors have been combined on such a scale,” says Mark Siezen, Executive Director at CBRE. “Every city, region and sector faces specific challenges. More than ever, data will prove instrumental in decisions about retail property.”

You can download the full report about the retail property market here.