Based on results from current stress tests, the Dutch office market appears to show greater resilience in the face of a new crisis than before the financial crisis hit in 2008. Vacancy rates will not reach the levels observed after the financial crisis even in the event of a relatively high unemployment rate.

Real estate advisor CBRE Nederland frequently conducts stress tests for the office market based on developed data analyses. This is based on four possible scenarios associated with the effects of the corona crisis on the national economy, as identified by the Dutch Central Planning Bureau. The four scenarios calculated include a situation where recovery is possible at the end of the year, and at the other end of the spectrum a highly pessimistic scenario in which a multiannual recession is expected. Even if the unemployment rate hits 9.4% by 2021 and there is a decline in employment of 9.5% until 2021, as forecast in the most negative scenario, the negative effects on vacancy rates are expected to remain limited. Despite the expected drop in demand, it is highly unlikely that vacancy rates in the office market will reach the heights witnessed in 2013.

The starting position of this crisis is considerably different from the situation before the financial crisis. Before the coronavirus outbreak, the market showed a historically low vacancy level. Combined with the limited number of new builds and a possible reduction of the number of new-build projects planned, availability will remain low in the short term.

The considerable rental growth we have seen in recent years is not expected to continue, but to stabilise. Lease discounts are expected to increase. 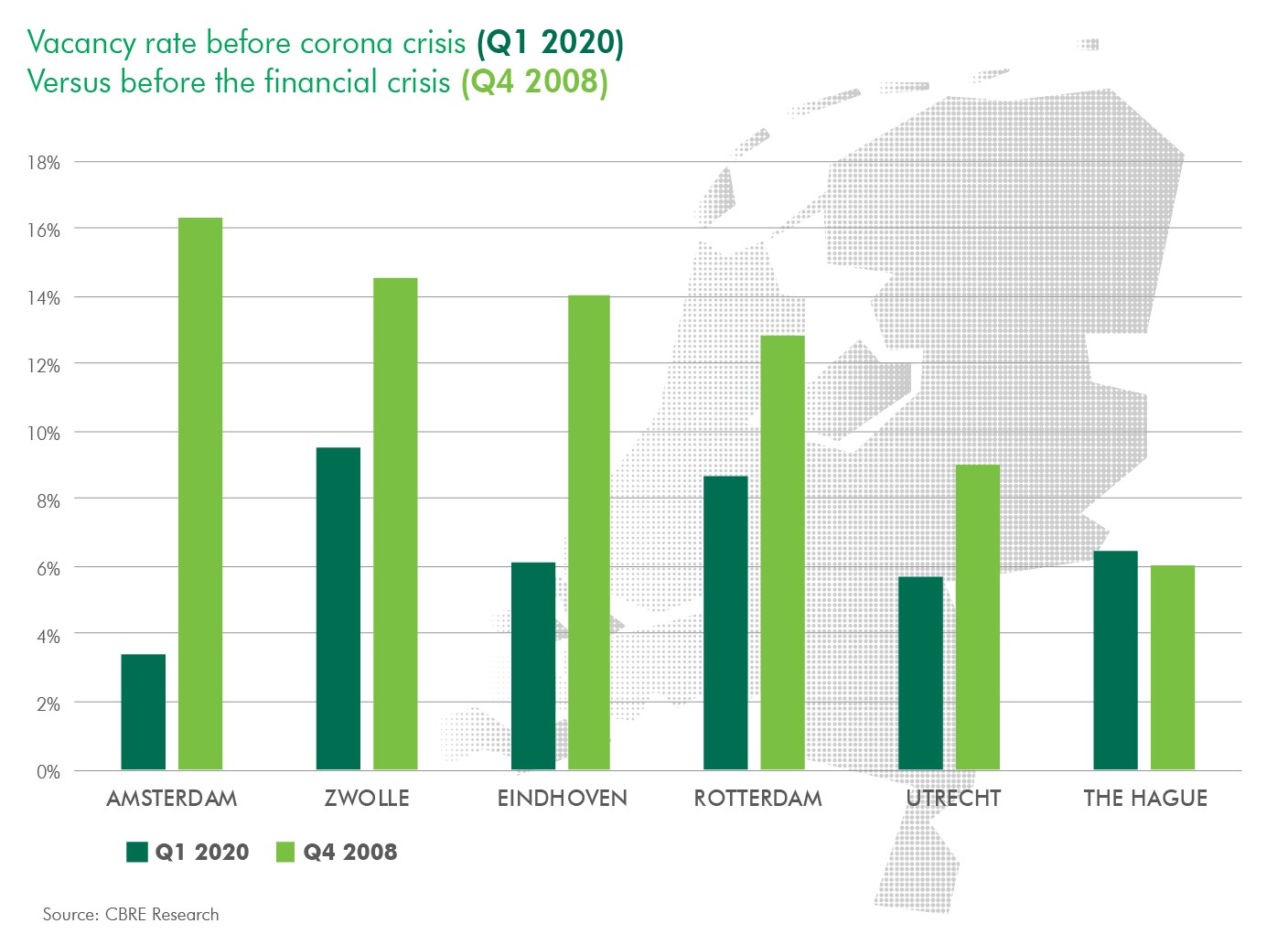 The starting position in 2020 is much better than back in 2008. The office market is healthy with a low vacancy rate and a limited number of new-build projects planned, for which delays are also expected. We also expect that the corona crisis will speed up the trends that started before the pandemic occurred, such as attention to flexible use, technological innovations such as smart buildings and outsourcing of services. Another example is the development of mixed-use buildings, which will be better equipped to withstand the impact of the corona crisis.

In the coming period, companies will focus on a return to the office after the National Institute for Public Health and the Environment (RIVM) gives the go-ahead. In practice, this will mean that in light of the measures implemented to combat corona, more square metres of office space will be needed than before.

More information about the impact of Covid-19 on real estate can be found on our Covid-19 page.

Dark stores and e-tailers in pursuit of consumers

CBRE to Discontinue Most Business in Russia

Laura Seckel is new Head of Healthcare at CBRE

‘Sloterdijk is reinventing itself as a lively, mixed urban area’

The Core nominated for award for Interior of the Year 2019